You are here: Home / Devilish Food / Oven or Pellet Grill Pizza With Gouda, Caramelized Onion, Tomato, and Bacon
This shop has been compensated by Collective Bias, Inc. and its advertiser. All opinions are mine alone. #BakeItYourself #CollectiveBias #HomemadeBaking
My husband recently got a smoker pellet grill and we have enjoyed making pellet grill pizza on it. The grill allows for a bit of smoke to be added to the pizza while cooking it without overdoing it. It is especially fun to compare the same recipe made as pellet grilled pizza vs. when made in the oven. This recipe for smoked Gouda, bacon, fresh tomato, and caramelized onion pizza, made with fresh pizza dough using Fleischmann’s® RapidRise® Yeast is done both ways!

The Joy of Making Your Own Pizza Dough

One of the best things about homemade pizza is that the dough is so great when you make it yourself with Fleischmann’s® RapidRise® Yeast​.  Making dough from scratch with Fleischmann’s® RapidRise® Yeast always results in a dough that has a really nice texture and also has that nice fresh bread flavor that you expect from a really good pizza. It is well worth the extra step of making dough from scratch to get the perfect pizza. It also does not have to be time consuming or difficult to make your own pizza dough. With Fleischmann’s® RapidRise® Yeast, it takes only 10 minutes! It is super easy, and aside from the time it took to caramelize the onions, the pizzas made in this recipe were done in just about 30 minutes. Here is how we made our pizzas in both the pellet grill and the oven, with fresh homemade dough.

I picked the ingredients for this pizza from items that would taste great either on their own in the oven or with a bit of smoke from the grill. Instead of using a regular pizza sauce, this pizza uses oil with some Italian seasoning with fresh tomatoes for a lighter pizza. It gives it a gourmet flavor!

Start by cooking up some bacon and caramelizing the onions in the bacon fat. Caramelizing onions takes a bit of time, but it is so worth it for their sweet flavor. If you want to save time, you can simply cook the onions until translucent instead, but it is well worth the effort to caramelize them. To do that, cook them on low to medium heat until they are golden brown in color. It takes about half an hour. You can also do this step the day before and refrigerate them if you like.

Next, make the pizza dough. Start with 1 cup of flour, 1 1/2 teaspoon sugar, 3/4 teaspoon salt, and packet of Fleischmann’s® RapidRise® Yeast. 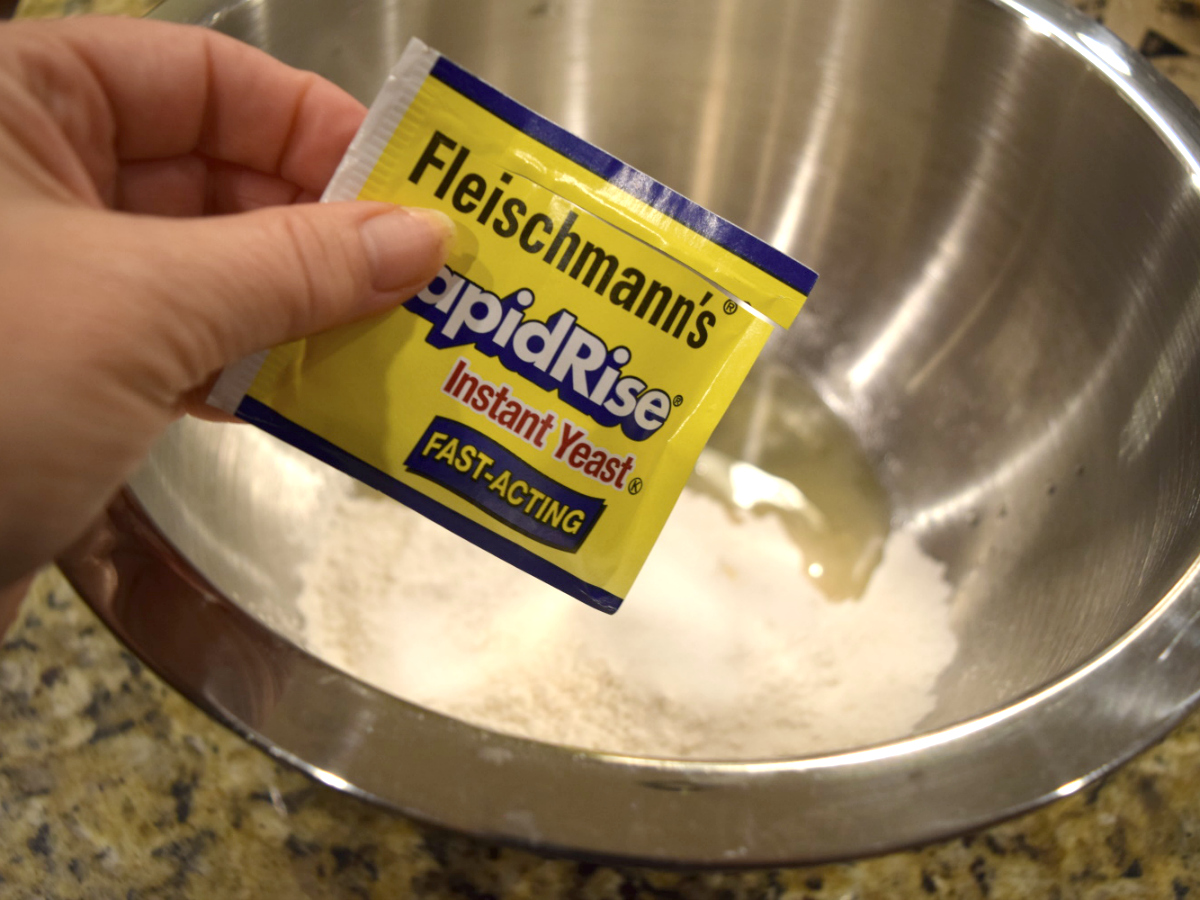 Next, add flour (up to another 1 1/4 cup) until the dough forms a sticky ball. Place it on a floured surface and knead it for four minutes. Sprinkle flour under it as needed to keep it from sticking. I like kneading dough. Just push and pull it and fold it over to give it a good working over. When you are done kneading, let the dough sit and rest for ten minutes. It will rise a bit during this time. During that time, go ahead and cut up our Gouda into chunks and slice your tomatoes. Then, you will be ready to assemble! Here is my pizza dough all ready to go.

Start by rolling out the dough. For the oven, I pressed the dough into an oiled pizza pan. For the pellet grill, sprinkle corn meal under the dough and press it into a rectangle shape. The corn meal keeps the dough from sticking when you slide it onto the pizza stone. Put some corn meal on your pizza stone as well before you slide the pizza onto it! Brush the dough with oil. Feel free to be pretty generous with this. 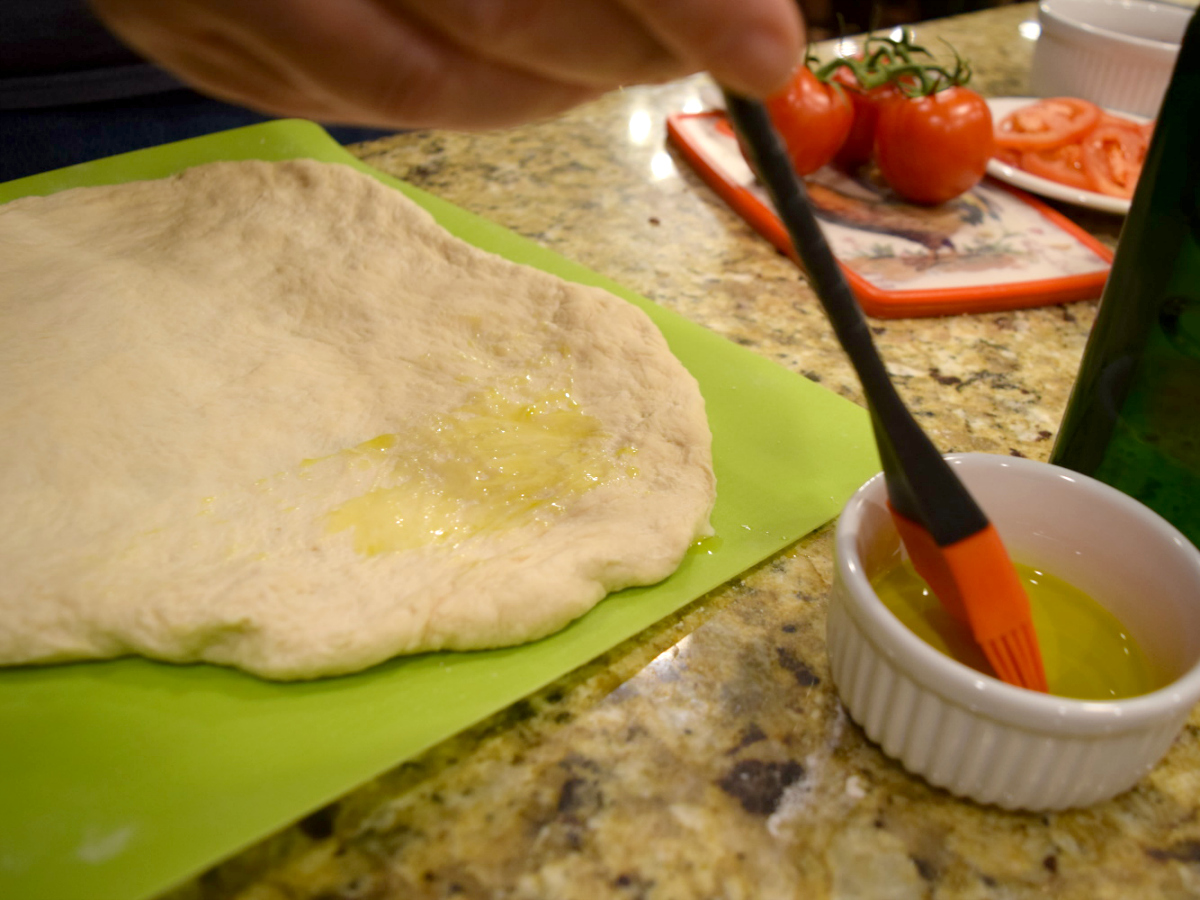 Start assembling the pizza by placing fresh tomatoes on it, followed by a sprinkling of Italian seasoning. From there, add your bacon, smoked Gouda chunks, and caramelized onion. Sprinkle the top with some shredded Italian cheese blend. It is now ready for the oven or the grill.

For the pellet grill, slide the pizza onto a preheated pizza stone and grill at 425 ˚F with light smoke for 12-15 minutes until the crust is golden brown and the toppings are cooked. For the oven, bake in a 425 ˚F preheated oven for 12-15 minutes until the pizza is fully cooked and the crust is golden. Remove the pizza and let it rest a few minutes before cutting. Here is our oven baked pizza.
And here is our pellet grill smoked pizza.

Serve your pizza with a salad, garlic bread, or enjoy it on its own with a bit of extra Parmesan cheese on the side. The smoked pizza had a wonderful hint of smoke flavor, while the oven baked pizza had a crisp clean flavor with extra sweetness coming through from the onion. Both were really good!

As you can see, gourmet pizza with a great homemade crust does not have to be difficult!

Overall, when you bake from scratch, you get that great homemade taste, plus the process of making it is enjoyable. With Fleischmann’s® 150 years of experience, you can bake quality recipes with Fleischmann’s® RapidRise® Yeast that you will be proud of and enjoy sharing. Lean more about baking with Fleischmann’s® and see lots of great recipes here!

2. Salt the onions to taste and Caramelize the onion in the fat by cooking on low to medium heat until they are golden brown (about 30 minutes), set aside

3. Preheat the grill or oven to 425°F. If using the pellet grill, preheat a pizza stone in the grill.

5. Add very warm water between 120-130 degrees and oil; mix until well blended, about 1 minute. If you don't have a thermometer, water should feel warm to the touch but not hot.

6. Gradually add enough remaining flour to make a soft dough.  Dough should form a ball and will be slightly sticky.

7. Knead the dough on a floured surface, adding additional flour if necessary, until smooth and elastic, about 4 minutes.

8. Allow the dough to rest for 10 minutes

9. Slice the tomatoes and cut the Gouda into bite-sized chunks.

10. Pat the dough with floured hands to fill greased pizza pan or baking sheet, or pat to form a rectangle on your pizza paddle or board used for transferring to the grill. For the grill, sprinkle corn meal under the dough.

11. Brush the dough with olive oil and layer with tomato slices, then sprinkle with Italian Seasoning.

12. Top with remaining toppings and sprinkle with Italian Cheese blend.

13. In the pellet grill, sprinkle the pizza stone with corn meal and transfer the pizza to the stone. In the oven, place the pizza on the lowest oven rack.

14. Grill or bake for 12 to 15 minutes, until cheese is bubbly and crust is browned.